It’s funny that I thought I’d have MORE time to blog once I started Quantum Soup and was working for myself. Hah! Running a business is a continuous effort of working towards long-term goals while also grasping at short-term opportunities as they arise – funding, conferences, training. I’m doing a lot more biz dev than I expected and a lot less programming.

But it is also glorious. For the first time in my life, I’m working on a commercial project that is my own idea (well…just over 50% mine). But it’s certainly nowhere near 50% my work. After six months we have the core team together and everyone is bringing enthusiasm and ideas to the project, creating something I couldn’t hope to accomplish alone.

An enthusiastic team really raises your energy. We’ve built a bunch of stuff, some of which didn’t work and had to change, but the game’s better for it. We’ve bounced ideas around and made unexpected creative connections. We’re getting into what is – for me at least! – a really enjoyable working routine.

And soon we will be ready to show some of that work, which is both exciting and terrifying. It won’t be long now…

I’m leaving Traveller’s Tales to do a new thing which I’ll post about later. This piece is about saying goodbye to a studio I’ve worked at for over 15 years.

It’s a strange thought that I will no longer be working within the familiar (and sometimes orange) walls of TT Knutsford. But it’s only just sinking in that I will no longer be surrounded by a horde of supremely talented friends. When I started at TT, I had four or five years experience, but it feels like it was here that I really learned my craft – sometimes from my own mistakes, but chiefly from the wisdom of colleagues. It has been an absolute privilege to work with so many expert developers.

TT has been a huge part of my life, and I’ll never be able to look at LEGO again without a wistful smile. I wish the many teams at TT towers every success in the future – and I’ll be watching with interest to see what my old friends get up to…

Towards the end of last year I was lucky enough to be able to join BAFTA, as a result of all the work my colleagues at TT and I have done over the years. I’m pretty chuffed with that 🙂

One of the perks is that I get to vote in the Games Awards, so in the run-up to Christmas I had an awful lot of games I needed to play in order to make an informed decision. It was a very interesting experience – I played a whole lot of games I would normally have ignored, and most I enjoyed much more than I expected to.

Voting is still ongoing – the results of the first round have gone to the juries, who will spend another month or two playing the shortlisted titles in depth so that THEY can make an even more informed decision. I get one more vote for the Best Game, but the other awards are now up to those juries. It’s not going to be easy for them, as this has been an excellent year with a multitude of great titles.

Maybe next year I’ll volunteer for a jury. I’m really enjoying the opportunity to acknowledge the best work of the industry.

I have been neglecting this blog again – happens when things get busy at work (or outside work!).

It has been a very eventful December. Ludum Dare 22 generated nearly 900 games in a weekend, but due to some technical problems and a healthy dose of repeating my previous mistakes, I didn’t quite finish mine. Play “Lonely Island” here.

Then Unity released a beta build that exports to Flash’s new Stage3D, and announced a game jam…with prizes. Shame they announced it just before Xmas when everyone’s busy. I mulled it over until new year before settling on a steampunk space dogfighting game set in the Voidships universe. It made sense to use the contest as motivation to produce something that could generate a bit of an audience for our fledgling IP. It was a late start, but with some invaluable model work from an artist friend (Thank you, Liam!) I managed to cobble together something that’s very rough but fun nonetheless.

My other game projects are temporarily on hold while Liam and I give it a proper polish ready for people to play in earnest.

So, there are four Doctor Who games releasing this summer. This is interesting partly just because new Who games are cool – maybe these will do the license justice. The last one, Destiny of the Doctors, was appalling and even the best Who game yet – The Mines of Terror – was clearly supposed to involve K9 and the Daleks, but had to change them for licensing reasons. And it’s a little disappointing for me personally, because I’ve wanted to work on a Doctor Who game for over a decade. But at least someone’s doing it…

But I’m more interested because of the format. These are free episodic downloads for PC and Mac, developed in parallel with the TV series, and written by TV writers. One of the producers has described them as four extra episodes of season 5. So creatively, there is a possibility of something quite special. I would be nervous about the involvement of writers with no experience in the interactive form, but under the guidance of Charles Cecil of Revolution, I’m pretty confident they’ll create something that works.

My only worry is that it does look a little low-budget – in the screenshots posted so far, the lighting looks poor and character models are both waxy and wooden. They’re apparently aiming for “stylised” look, but haven’t really introduced a style to make up for the simplification. I hope the finished product is a little more polished than the work in progress screenshots.

Nevertheless, I’m excited about the possibilities of this format, and I hope it’s very successful. If you want more detail, Develop magazine have a very detailed article here.

Choice of Games have released a free web-based multiple-choice game called Choice of the Dragon. It’s basically an RPG pared down to the most meaningful choices. Imagine half-an-hour of random combat and exploration between each of the choices, and you’ve got Mass Effect or Fable.

It’s a striking design choice, which works well – the text is terse but witty, and the choices reveal character…forcing you to decide whether your dragon is cruel or merely disdainful. And the consequences of your choices play out later in the story. My only real criticism is that with such concise vignettes you have little time to develop empathy with any of the characters your dragon meets – but that may also be because you’re a dragon, who doesn’t have a whole lot of empathy anyway.

The best thing is that they are working to make the scripting language and interpreter available to anyone. It’s not just a branching tree of options, they have support for simple variables so that extra choices can be made available based on past actions, or the success of a given choice can depend on your previous experience. I hope we’ll see a whole crop of games exploring the strengths of this minimalist format – anything from intimate character dramas to epic tales of world domination. I can even imagine major games studios prototyping their plot arcs in this engine.

The interpreter has been ported to several mobile phone platforms too, so you can download Choice of the Dragon for free for your iPhone or Android phone. And finally, they have a blog discussing the finer points of creating games in this format, which is well worth a read.

So, why not go and write a game?

It has quickly become apparent that I’m short on game design blogging material – because what I do at TT is obviously confidential, and I don’t play as many games outside work as I used to…I have a little girl now who prefers Daddy to play at being a pony than a Renaissance assassin.

Still, the holidays are coming and my wife and I spent the whole of last Christmas in the Capitol Wasteland, so hopefully I’ll be able to catch up on the state of the art.

Any gaming parents out there, your top tips are welcome 🙂 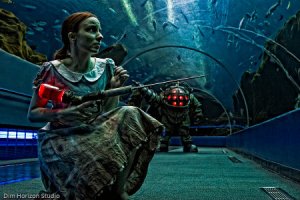 Wonderful, wonderful photoshoot – a Big Daddy and Little Sister in an aquarium tunnel. Top notch costumes, great modelling and excellent photography. I’d have liked to see some shallower depth of field in there, but other than that I can’t fault it. Props to Harrison Krix, his fiancee and their photographer!

See the full gallery at Geekologie.

This is the latest game that I worked on, in a limited capacity – I did some of the boss levels, which we haven’t done before in a LEGO game…not on this scale, anyway. This game is the first outing for our new split-screen tech, which I think is brilliant. It’s also got vastly improved vehicle physics, and a nifty level editor. One of the early reviews criticises the editor for not allowing you to make levels that look like the ones ingame, which made me laugh…and grind my teeth, metaphorically speaking. Some people still seem to think game development is a breeze and we spend all our time just playing around.

See what the press think overall at MetaCritic. Not many reviews up yet but that will change. The Guardian gave it 5 stars, so I

hope that one gets included. I suspect we’ll get the usual mixture of “Meh” from the hardcore gamers and “Woot!” from the casual sector.

I’m certainly enjoying it, perhaps because I wasn’t on the project from the very beginning. There’s loads of levels I didn’t play myself during development, and the cutscenes keep making me laugh out loud. Definitely one to be proud of.